In partnership with Cooperation for a Green Future 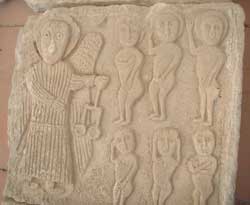 The Racha Regional Museum is the antiquity repository representing the districts of Oni and Ambrolauri. 14000 unique artifacts belong to the museum collection, from the fields of archeology, ethnography, numismatics, natural history, fine art, historical documents, manuscripts, and printed books. Their historical and cultural value is very important not only regionally but also as a significant part of the Georgian national cultural heritage.

Racha Regional Museum is located in the mountain town of Oni, the administrative center of Oni district in Racha region in the west part of Georgia. The museum is one of the countrys more important sites from a cultural heritage point of view. Unique archeological, cultural, and ethnographic artifacts were examined and collected for the museum from all around the Racha region from 1948 to 1952. The museum was officially opened on October 12, 1952. Since its opening, the museum has been one of the most important sites for local residents and well as visitors. Scientists from different fields, including archeologists, ethnographers, artists, and geologists, have worked hard to support and improve the museum all this time.

The museum suffered greatly from the devastatingly strong earthquake that occurred in Racha on 29 April 1991. The earthquake was the largest ever recorded in the Caucasus Mountains and was centered in the Oni area. With the efforts of the local government and residents, repairs were made to the museum building. However, the available resources have been insufficient to properly organize the museum exhibition hall. Furthermore, due to the earthquake as well as the tenuous storage conditions during this chaotic time, some of the exhibits have suffered damage.

Cooperation for a Green Future has partnered with the Racha Regional Museum to ensure that the priceless historical artifacts in its collection are preserved and displayed. Cooperation for a Green Future strongly supports the preservation and appreciation of Georgian cultural heritage. The traditional wisdom accumulated over millennia has allowed the Georgian people to survive and thrive over the ages. This knowledge embodies sustainability, and should be documented and disseminated as an example of livelihood strategies that continue to have relevance now and into the future.

Additional photographs of the museum collection.